Virunga National Park Field Report by LuAnne C ~ Yesterday, we received a 9-month-old baby Grauer’s gorilla that had been poached from Kahuzi-Biega National Park, south of Lake Kivu. The Gorilla Doctors (MGVP) escorted the baby to our park headquarters where she will be quarantined and cared for at our lower enclosure, which is adjacent to the orphan mountain gorilla center. 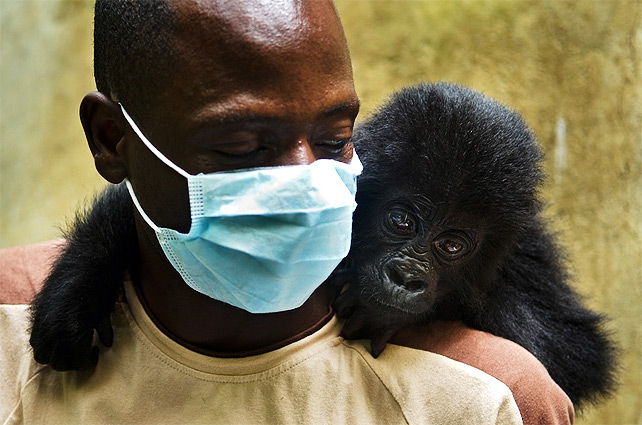 The baby gorilla was taken from the forest sometime in early August and appears to be healthy, according to the Gorilla Doctors. She bonded quickly with Dr. Martin who held her for most of the trip to the park. When she became hungry, she ate bananas, but clearly wanted some mother’s milk, and would pull at Martin’s shirt where she thought her mother’s nipples should be, and even put her mouth on the shirt trying to suck. When a baby bottle with milk was produced, she seemed irritated with it, and shoved it away. 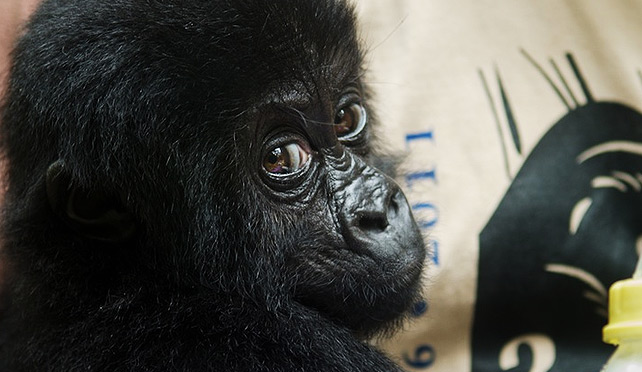 The security at the park headquarters and surrounding area has been assessed as stable by our security officers, and Virunga is only one of two places in eastern Congo with a facility to house gorillas. The baby will eventually move to the GRACE facility east of Butembo where orphaned Grauer’s gorillas are cared for, but in the meantime, we are fortunate to be involved in caring for this adorable baby gorilla.

The circumstances surrounding the poaching of the gorilla are not entirely clear. It appears that the FDLR rebel group may have first poached the gorilla from Kahuzi-Biega National Park. Members of the Raiya Mutomboki rebel group say they took it from the FDLR and later gave it to the director of a Congolese environmental organization who brought it to Kahuzi-Biega headquarters on Thursday of last week. 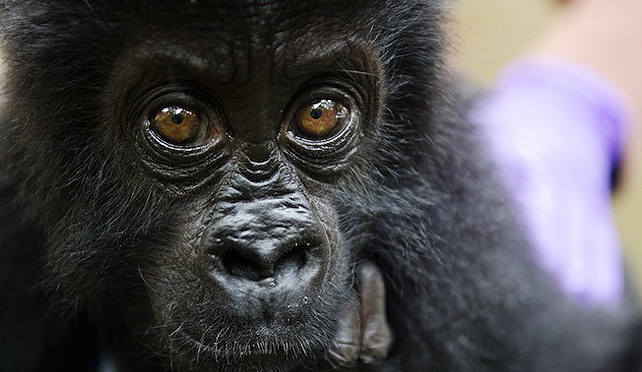 Our three orphaned mountain gorillas that live in the nearby enclosure discovered their new neighbor almost immediately, climbing the nearest tree to watch her for hours. Maisha pounded her chest several times to get the baby’s attention. The baby Grauer’s gorilla and our Mountain Gorillas are not allowed to have close contact as they could pass diseases to each other.

We will keep you posted on the welfare of this baby gorilla in the next few weeks.

Check out more Photos and Ranger work at this link: http://gorillacd.org/2012/09/17/poached-baby-grauers-gorilla-comes-to-virunga/