Gorillas Caught in the Crossfire in the Democratic Republic of Congo

The world’s leading conservation organizations have joined together to fight for the survival of the Endangered Grauer’s or eastern lowland gorilla (Gorilla beringei graueri).

Found only in the mountain and mid-altitude forests of the eastern Democratic Republic of Congo (DRC), Grauer’s gorilla is not only the largest of the four gorilla subspecies but also the largest primate in the world.

With their entire range consumed in conflict since 1996, important populations of Grauer’s and their chimpanzee (Pan troglodytes schweinfurthii) relatives have gone largely unmonitored. Different sources have offered varying population estimates since that time, but their true status is unknown.

The action plan represents an important milestone in the conservation of great apes in the DRC, bringing together a large number of government and civilian stakeholders and a panel of ape conservation experts to identify essential actions to slow the decline of gorillas and chimpanzees in the region.

Dario Merlo of the Jane Goodall Institute said: “Conserving the remaining Grauer’s gorilla populations, as well as chimpanzees in the area, requires a dynamic approach and the participation of all areas of society from national government to local communities.” 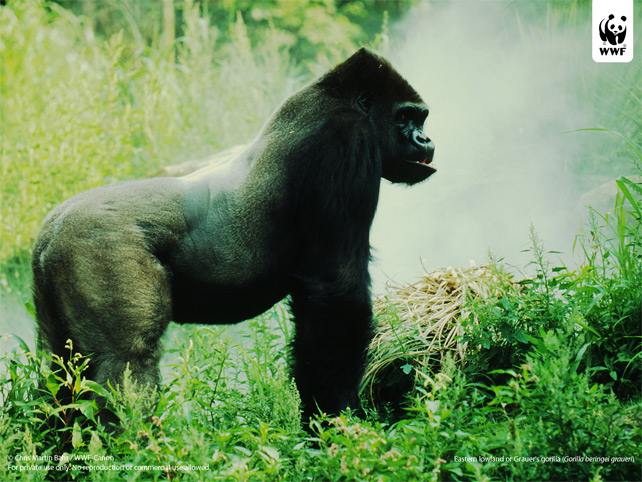 Having identified and agreed on the need for a coordinated and consolidated approach, the in-country teams are now working closely, each taking the lead on a component of the plan while supporting the others with their expertise. One of the key activities identified is the need to assess the true status of gorillas and chimpanzees in the region.

Subsequent surveys by WCS to establish a population estimate for Grauer’s gorillas, which did not take place until 1994, included the Kahuzi-Biega National Park and its adjacent forests, the Itombwe Massif, and Maiko National Park. These surveys found that gorillas remained highly threatened, primarily from hunting and human settlement, and that several important subpopulations had been lost. Results of these surveys suggested that at the time the region supported approximately 17,000 gorillas. “In the 1990s, carrying out surveys in this region was challenging, but we did not have to contend with the insecurity that followed. Comprehensive follow-up surveys have been impossible until now” said Dr Liz Williamson of the IUCN/SSC Primate Specialist Group.

Andrew Plumptre of WCS said: “The Wildlife Conservation Society, Fauna & Flora International and the Jane Goodall Institute have designed a new scientific approach to survey this endangered ape across its 80,000 square kilometer range with statistical help from the Max Planck Institute of Evolutionary Anthropology. Together we will be testing a new survey technique that will allow improved future monitoring of this species in a more cost-effective manner. This design will allow us to be more confident about the impacts of the civil war in the DRC on Grauer’s gorilla numbers.”

Lilian Pintea of the Jane Goodall Institute said: “With support from Google, DigitalGlobe and Esri, we are also applying innovative, cutting-edge mobile mapping, satellite imagery, and cloud-based technologies to equip survey teams with high-resolution base maps and enable local communities to contribute to ape monitoring efforts.”

Since 2003, several attempts have been made to survey parts of the Grauer’s gorilla’s range. While results from these preliminary surveys found that gorillas still exist at several key sites, they also documented what appears to be a severe decline of 50-80% since the 1990s.

Stuart Nixon of Fauna & Flora International said: “Today, the remaining Grauer’s gorilla populations are small and localised and occur in regions of intense illegal mining activity and insecurity. Until we can complete the much-needed surveys, our best guess is that between 2,000 and 10,000 gorillas remain in around 14 isolated populations. Without a dedicated effort, the next 10 years will be marked by continuing local extinctions of this forgotten gorilla.”

Classified as Endangered on the IUCN Red List of Threatened Species, the new surveys are vital to accurately assess Grauer’s gorilla conservation status and to identify the highest priority populations for focused conservation efforts and long-term monitoring.