Unfortunately, the increased instability caused by the current conflict has created a more favorable atmosphere for rebel groups, such as the FDLR, Mai Mai Nyatura, to increase their illegal tree cutting and charcoal making operations in Virunga National Park. These activities are one of their primary sources of funding, and as rangers, it is our job to stop them.

Early one morning last week, I set out with a team of 10 rangers to patrol the Kalengera, Kako, and Rubare sub-sectors of Virunga NP. We began our patrol at06:00 and after four hours of walking, we came upon five men making charcoal. As soon as they saw us they tried to flee, but we managed to arrest three of the five.We then continued the patrol toward Rubare and an hour later came up on seven men running a large charcoal operation. This time, not a single charcoal maker escaped arrest. After securing those arrested, my men and I set to destroying their kilns and their camp. 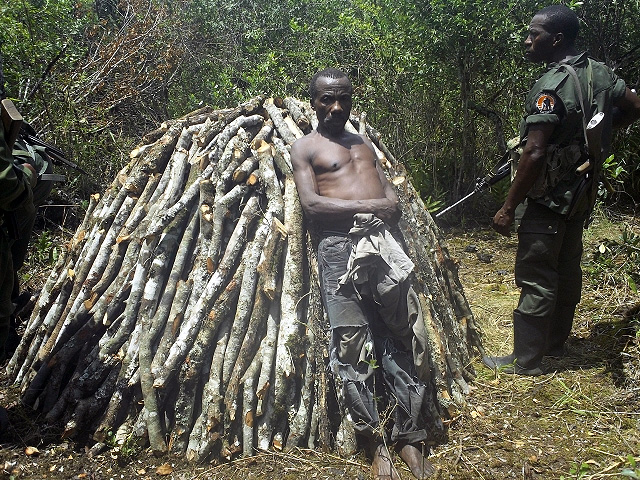 We arrived safely back to the Rumangabo station at 18:45 and took our prisoners to the Rumangabo prison where their identities were verified and tickets were given. These men were also given a strong reprimand and education about why they shouldn’t destroy Virunga and why they shouldn’t take work with the rebel groups. They had the next 48 hours in prison to think about it. As is most often the case, rebels hire or coerce local villagers to do the work of making and hauling charcoal while they hide out on the periphery. This is why breaking up charcoal operations can prove deadly for Virunga’s rangers. I can honestly say, though, we will not stop facing down those who seek to destroy Virunga until our last drop of blood is spilled.

To find out how you can help visit: http://gorillacd.org