Although I address this Threat to the mountain gorillas and Rangers in the Galiwango film, this right here is  Real life, and Rangers are truly dying at the hands of militias, mai mai rebels and poachers. Kindly show your support with a donation to the EMERGENCY FUND FOR NEW WIDOWS AND ORPHANS ~ Find the Donation details on the Gorillacd website: http://gorillacd.org/

Mountain Gorilla Conservation Front ~ By Emmanuel De Merode, Director for Virunga National Park: Following the attack on a Virunga ranger patrol on Lake Edward last week, we buried our men who died and the soldier who worked alongside them at the fishing village of Vitshumbi on the south side of Lake Edward in the central sector.

Due to serious security issues, no one from the southern sector was able to travel into the area, but Rodrigue Mugaruka, warden of the central sector, attended the funeral and provided us with information and photos.

The stories of our two colleagues represent the kind of hardship that so many in Congo have suffered.

If you would like to join others in support of the families of the fallen Rangers, use the “Donate” button under the Title “EMERGENCY FUND FOR NEW WIDOWS AND ORPHANS” on the GORILLACD  Webste at this link: http://www.gorillacd.org/

Ranger Paluku Matembela lost his wife, Dieu Merci, in childbirth on the 7th of May this year. A friend in Kiwanja has been taking care of the child for the last six months. Paluku’s 14 year old daughter who lived with him in Vitshumbi fainted when she heard the news of her father’s death and spent two days in the hospital. 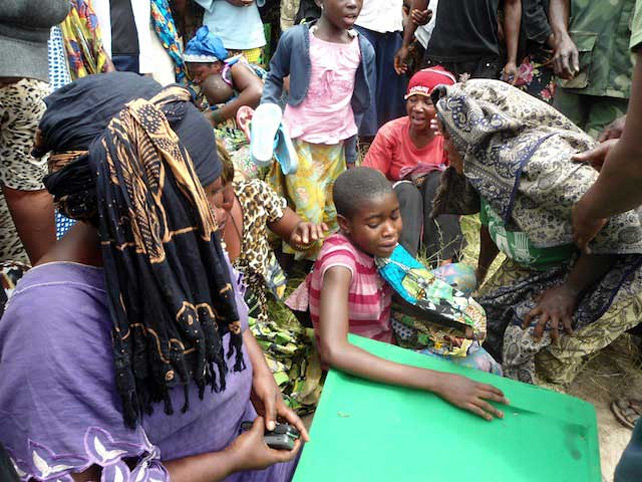 Benoit Karvante, age 32, lost both his parents at the age of five. He was raised by the family of Muchele, a human resources officer for the park, and grew up in the company of park rangers. Benoit was mute, and although he could not be a ranger, he worked as a boatman for the park, going on dangerous patrols with park rangers for 10 years. Benoit was married with two children age three and five.
Ngangwa Walinoga, the soldier who died on the patrol, leaves behind a wife, Marie, and six children.

SUPPORT THE FAMILIES OF THE FALLEN RANGERS ~ KINDLY DONATE

Your generous gifts will make an enormous difference in the lives and futures of the families and orphans for years to come. It sends a message as well to all our rangers that their work is valued and their families will be taken care of. Thank you for your support.

If you would like to join others in support of the families of the fallen Rangers, use the “Donate” button under the Title “EMERGENCY FUND FOR NEW WIDOWS AND ORPHANS” on the GORILLACD  Webste at this link: http://www.gorillacd.org/