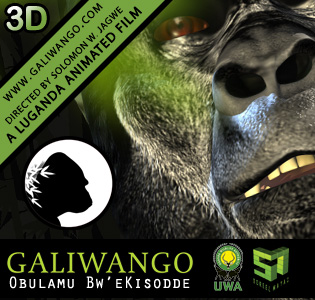 My name is Solomon W. Jagwe. I am a Ugandan,  Independent Film Director, 3D artist and Animator, based in Fayetteville, NC, USA. ( http://www.sowl.com )

I came to the US in 1996 to finish my degree in Art. It was through a series of miraculous events and a very kind English Lady, called Hazel Collett, that I met on a plane out of Uganda. She ended up offering to pay all my tuition and has since become a very good friend to my family and I. I am a proud father of 2 lovely children, Solomon and Jasmyn. I met my lovely wife, Nerissa, on my first day in college, yes my college sweetheart :). We have been married for 10 years now.

I am so grateful to Hazel, because without her sacrifice I never would have acquired the animation skills that have enabled me to take on the project that this website is about.

I am working on a short animated film entitled “Galiwango, Obulamu Bwe Kisodde” (Translated, “Galiwango, The Life of a Mountain Gorilla), seeking to sensitize my fellow country men in Uganda, the DRC and Rwanda about the plight of the last remaining mountain gorillas. 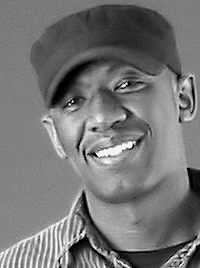 I am looking for like minded people with whom I can partner to help with funding the project. I am currently doing everything, from the voices, to the motion capture acting, the rigging of the characters, the animation, rendering etc.

I have been working in the gaming and simulation industry for over 12 years now. I have watched alot of films and documentaries about Mountain Gorillas, but none seem to effectively target the local populations where the suffering is most ardent. The majority of the documentaries about gorillas, are written in English, a language which the majority of the local populations, where the Gorillas live, do not speak or read fluently.

I want to use the skills I have acquired and my African roots, to reach out and create a somber but humor filled animated film, that both adults and children can appreciate.

The purpose of this Film is to reach out to the Youth, to sensitize them to the plight of the last remaining 786 mountain gorillas, as well as the hard work done by the rangers as they go about protecting these endangered wildlife treasures from poachers, the occasional rebel remnant groups and the inadvertent traps. I am also striving to shine a light to the impact of the deforestation of the Virunga and Bwindi jungles for the illegal charcoal trade, on local communities like the Batwa and the wildlife.

Galiwango is a tribute to my grandmother, the late Mrs. Miriam Ssejjobyo, who taught me how to tell stories as a young african boy. I vividly remember sitting by her feet and listening intently as she recounted stories of Waguluddene, wakayima and wango. I drew on those fond memories when I started writing the story of Galiwango.

The subject matter is drawn from my longstanding fascination with nature and wild life as a whole. I have always loved studying wild animals, birds and fish. I remember how I used to skip lunch, while in boarding school, and spend that time reading Encarta encyclopedias filled with beautiful images of creatures from all over the world.

Mountain gorillas captured my imagination not only because of their immense size and grace but also by the alarming rate at which they were disappearing from the face of the planet. It was quite sobering and rather saddening to think that these awesome creatures might not be around for future generations to appreciate.

Like my late grandmother, I wanted to tell stories about the struggles and triumphs of these endangered great Apes, and shed a light on the struggles and triumphs of the men and women working had to protect them. I tell the story from a captured Gorilla’s point of view. I weave into the tale a human element of interaction with technology, war and humor.

I chose the Luganda name Galiwango for the main character because of its meaning of great size and strength.
The final film is told in Luganda by Galiwango as the narrator. It will have English close captioning for those who don’t speak or read Luganda.

Galiwango’s story begins deep in the thick tropical forests that hug the imposing Virunga Mountains. I trace Galiwango’s journey as a captured baby Gorilla who is taken away from Uganda and illegally sold to a research facility in an undisclosed western country. As part of an illegal animal trafficking network, a group of scientists train Galiwango how to use technology with the intent of profiting from the success of the project.

Years later, Galiwango’s journey comes full circle to Uganda via an unfortunate or fortunate event. A transport plane carrying technical equipment and a crate housing Galiwango, is shot down by rebels as it flies over the virunga mountains enroute to another research laboratory. It’s at the transport plane crash site that Galiwango encounters two other Gorillas, Muwanguzi, an aging but wise Silver Back Gorilla, and an escaped young Gorilla called Lutalo, who carrys a rifle that got stuck on him when he escaped from a gang of poachers.

The rest of the story explores the dangers of living in a forest that is rife with conflict and greed. Close encounters with poachers and rebel remnant drive the constant need by Galiwango and his friends to be alert and staying on the run as they struggle to stay alive.

I wrap up the film by showing the advances that have been made in the effort to conserve the mountain gorillas, the hard work done by the Park Rangers, and dynamics of the communities as they learn to live alongside the mountain gorillas, and the challenges faced by the 3 frontline States, Uganda, Rwanda and the DRC, in the joint effort to maintain peace in the Virunga region.

Gorillas are intensely family oriented creatures and that fact is evident in the interaction between Muwanguzi and Galiwango. Muwanguzi tries to fill the role of an optimistic father figure for the orphaned Galiwango and Lutalo plays the role of a rather skeptical and contentious friend.

My hope is that we all can appreciate what a rare gift we have been given by God through the unique location of the mountain gorillas. They exist only in Uganda, Rwanda and the DRC. I also hope that as concerned citizens, we can take steps to help fight against the ever impending possibility of the extinction of mountain Gorillas. I hope that Galiwango plays a part, however small, to the conservation of the Mountain Gorillas.

I also would love to look back and say that I was as good a story teller as my late grandmother and that I was able to positively impact my fellow countrymen and women through the story of Galiwango and his friends. I am grateful to her for helping capture the tales of Elephants, leopards, and hares in the stories she told me.

Looking forward to hearing from you.