Threats to Endangered Wildlife ~ NASA Images of Deforestation in Virunga

Gorilla CD Field Report ~ NASA recently released some photos of Virunga National Park, comparing the forests from 1999 to 2008 in the northern sector of the park. The photos show significant deforestation along the borders. The rate of forest loss shown in these two images is the highest among all national parks in the Democratic Republic of Congo (DRC), according to the study.

Satellite photos reveal forest destruction in DRC
October 2012. Flying hundreds of kilometres above the Earth, satellites rarely see the human suffering from war and poverty. But decades of unrest have left a very visible impact on the Democratic Republic of the Congo (DRC).
The DRC contains half of Africa’s tropical forest and the second largest continuous tropical forest in the world. Because of unrest and economic instability, the Democratic Republic of the Congo has mostly escaped the industrial-scale deforestation that has taken place in other tropical countries such as Brazil and Indonesia. The exception is near the country’s eastern border, around Virunga National Park.

Mountain gorillas under threat
Home to critically endangered mountain gorillas, the forests have been disappearing quickly as population growth and violence have driven people into the resource-rich forest in and around the park. Subsistence slash-and-burn agriculture and charcoal production have eaten away at the trees, transforming deep green forests into pale savannah grasslands.

In the images below, the space between the left white line and the red line shows the deforestation. The forests have been disappearing quickly as population growth and wars send people into the forests in and around the park to cut trees for charcoal or clear forests for agriculture.

1999 – 2008 deforestation images
The Landsat 5 satellite obtained the top image on February 13, 1999, and the lower image on September 1, 2008. (More recent images of the region were cloudy.) The city of Beni is tan and grey, while the forested Virunga National Park is dark green. The blue Semlike River meanders northeast through the park. The rate of forest loss shown in these two images is the highest among all national parks in the country. 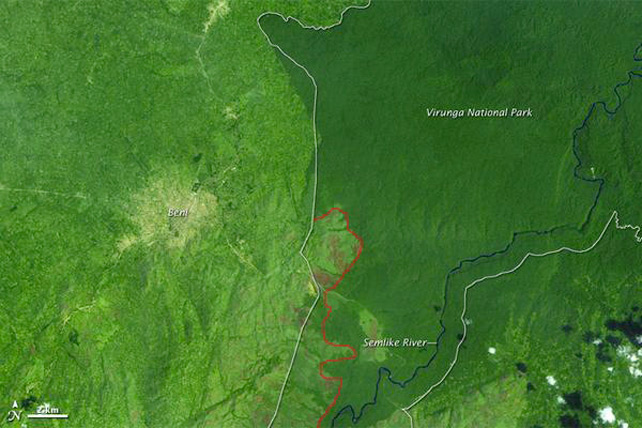 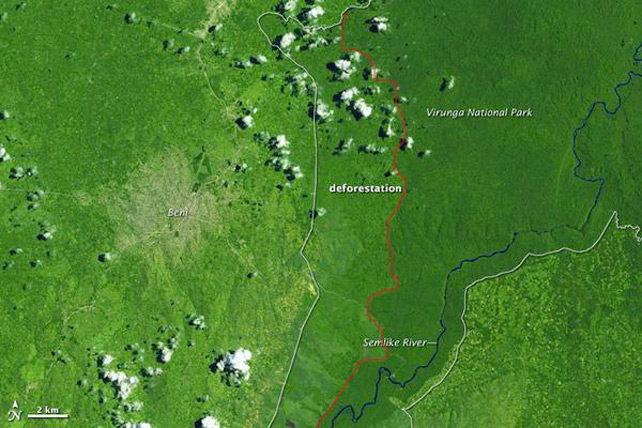 Forest loss across the DRC
As a whole, the Democratic Republic of the Congo contains 159,529,000 hectares (615,942 square miles) of forest. Between 2000 and 2010, the country lost 3,711,800 hectares (14,331 square miles) of it, according to a recent analysis of Landsat data completed by Peter Potapov and a team of researchers from South Dakota State University, the University of Maryland, and the Observatoire Satellital des Forêts d’Afrique Centrale. The study by Potapov is the first to survey the entire country since the U.S. Geological Survey made Landsat data available for free in 2008.

Understanding tropical deforestation is important because forests store vast amounts of carbon. Deforestation releases carbon to the atmosphere and prevents the forest from taking up more carbon. Tropical forests also sustain a wide array of plants and animals.

Between 2000 and 2010, the Democratic Republic of Congo lost 14,331 square miles (3,711,800 hectares) of its forests, according to a recent analysis of Landsat data completed by Peter Potapov and researchers from South Dakota State University, the University of Maryland, and the Observatoire Satellital des Forêts d’Afrique Centrale.