Check out this VIDEO ~  Here is an update on the Galiwango Film Audio score. My good friend Alan Kisaka, based in Los Angeles, CA,  has been busy at work on several tracks for the more somber scenes in the film. I am really excited at how the final is going to sound and for Alan’s generosity.  Alan plays for a Band called The Strangers, do please check them out and show them your support! Website:http://thestrangers.org/ 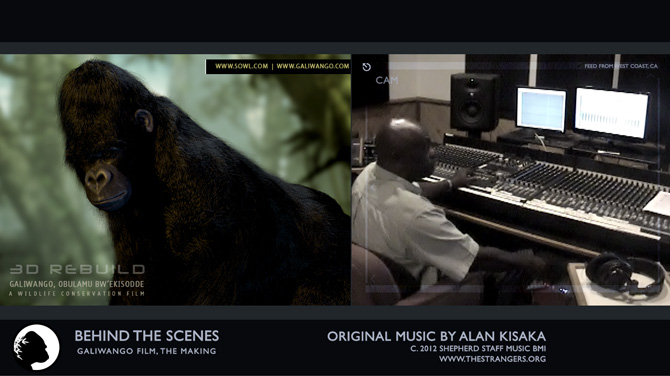 Behind the scenes of the Making of the Galiwango film Sound track and audio score ~ Thanks to Alan, your talent is greatly appreciated and thanks for joining me in this effort to raise awareness to the plight of the last remaining mountain gorillas, and the sacrifices of the Rangers in the range states, who are working hard to protect these endangered great apes and their forest habitats.

The purpose of this Film is to reach out to the Youth, to sensitize them to the plight of the last remaining “less than 800” mountain gorillas, as well as the hard work done by the rangers as they go about protecting these endangered wildlife treasures from poachers, the occasional rebel remnant groups and the inadvertent traps. I am also striving to shine a light to the impact of the deforestation of the Virunga and Bwindi jungles for the illegal charcoal trade, on local communities like the Batwa and the wildlife.