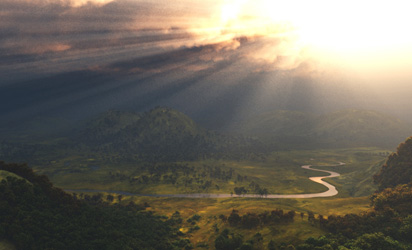 Check out the digital setting of Galiwango’s Story. The terrain was designed to loosely match the broad shouldered mountains that stretch between Uganda and the Democratic Republic of Congo, including references from Rwanda. Some Artistic License was employed. Enjoy the Visuals.

FACT FILE: Located in DRC on the border with Rwanda and Uganda, Virunga National Park is home to more than half the world’s 720 remaining mountain gorillas – one of the most critically endangered species on the planet.